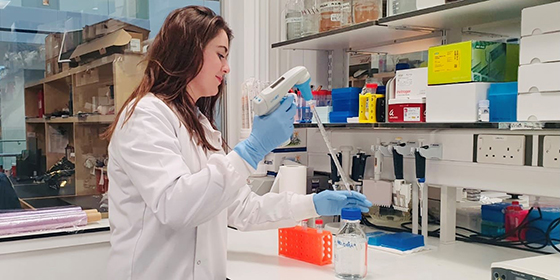 This week’s Science First highlights the work of Orla Dunne, recent recipient of the International Foundation for Ethical Research (IFER) Graduate Fellowship for Alternatives to the Use of Animals in Science. IFER receives funds to provide these Fellowships through annual grants from NAVS.

We recently had the opportunity to touch base with Orla, whose project involves characterizing a cell-based model to study neuronal responses in chronic obstructive pulmonary disease (COPD). Orla is conducting her research through the Wellcome-Wolfson Institute for Experimental Medicine at Queen’s University Belfast, in Northern Ireland. Her project is currently in its first year of IFER funding.

Although COPD research is often performed using animal models, Orla is using a human cell-based model in her studies.

“I think we should be using human models to study human disease, as findings from animal-based research do not always translate to humans,” she told NAVS.  Orla is working with nerve-like cells that she derives from stem cells harvested from extracted human teeth in her research. She is examining the cells to determine agents that can make them hyper-responsive, because in respiratory conditions like COPD, nerves in the airway can become overly responsive to stimuli. This results in a debilitating chronic cough.

While Orla has been able to make progress with her research project over the past year, the COVID-19 pandemic has presented her and her lab mates with some unexpected challenges. There was a full lab closure for several months and researchers had been restricted to working in shifts. Additionally, she experienced some delays in receiving laboratory reagents that were ordered. These delays were related to both the pandemic and to the recent withdrawal of the United Kingdom from the European Union.

But that hasn’t stopped Orla from sharing her research findings and disseminating information about humane and human-relevant models with others in the scientific community—or from winning awards for doing so!

Orla presented her work at several symposia over the last year, including the London 11th International Symposium on Cough, where she was awarded one of three prizes for best abstract. She also received an award for best oral presentation at the annual BREATH conference in 2020 and was highly commended for her poster presentation at a series of student symposia at Queen’s University Belfast, where she also won a third-place prize.

Orla is optimistic about the role that animal alternatives will play in the future.

“The development of sophisticated in vitro cell culture models, organ on chips and organoids are crucial for the replacement of animals in research,” she noted. “I am hopeful that as more research is published using these animal-free alternatives, and with the support of organizations like IFER, more in vitro models will be used to replace certain animal-based studies in research.”

NAVS wishes Orla continued success with her project, which she plans on completing later this year. She would like to stay involved in research based on developing stem-cell derived neuronal models for studies of chronic cough and other neural dysregulations for her post-doctoral studies. We’re honored to count Orla among the growing number of IFER fellowship recipients who are leading the next generation of humane scientists.