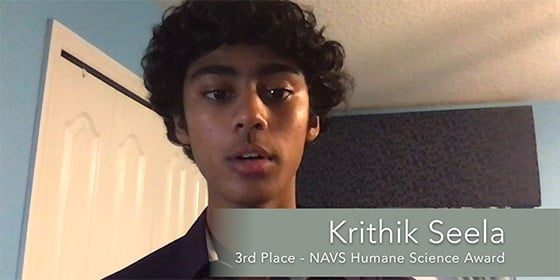 NAVS awarded two third-place prizes at ISEF. This week, we are highlighting the work of Krithik Seela, who was recognized with a Humane Science Award for his project, which focused on developing computer models to improve the drug discovery process.

“From the very beginning of my research career, I knew that I did not want to rely on animal models, but instead, rely on copious amounts of already existing data to build both a humane and scalable process,” Krithik told NAVS. “A significant subset of existing research for drug discovery utilizes animal models for testing of both safety and efficacy of novel therapeutics. And, when I first learned about this, I had an even stronger motivation to perfect my computer model to further reduce unneeded harm to animals.”

When the coronavirus pandemic first began, Krithik became inspired to improve upon the drug discovery process when he realized how long it was taking researchers to find treatments for people infected with the virus.

“I was motivated to create a project that uses an efficient computer-based method to find treatment options for new conditions by leveraging already existing drugs,” he said.

Krithik’s project focused on developing computer algorithms to help streamline the drug development process in a way that can help reduce the number of animals used. By examining existing drug databases and looking for drug-disease and drug-drug interactions, he developed different computer algorithms to help repurpose drugs that are already approved by the Food and Drug Administration (FDA) to be used to treat new conditions.

“With these models,” Krithik explained, “I hope to cut the exorbitant costs associated with drug discovery and create a much more effective method that will help thousands of patients suffering from chronic conditions or other uncured medical issues which require experimental cocktail drugs.”

Krithik’s computer models showed promising results, as they were able to identify the most appropriate drugs that could be used to treat different diseases. The models also identified applicable drug relationships with an accuracy of up to 84%. He plans to continue working on expanding his models to further improve upon them.

For other students looking to integrate humane methods into their scientific efforts, Krithik offered the following advice:

“The most candid advice I have is really to just go for it,” he said. “It’s much easier than expected in most cases to integrate humane methods into research and integrating these methods will often improve your research.”

NAVS wishes Krithik success with the next phase of his educational journey—attending college and focusing on computer science, chemistry and biology. We are thankful for his efforts to advance science without harming animals and are honored to count him among the growing number of NAVS Humane Science Award recipients.

Learn more about Krithik’s project—and hear from all of this year’s Humane Science Award recipients—at NAVS.org/ISEF2021.

Help NAVS continue supporting innovations in smarter science, such as Krithik’s, that advance the discovery and use of human-relevant solutions without the use of harmful, flawed and costly animal experiments.